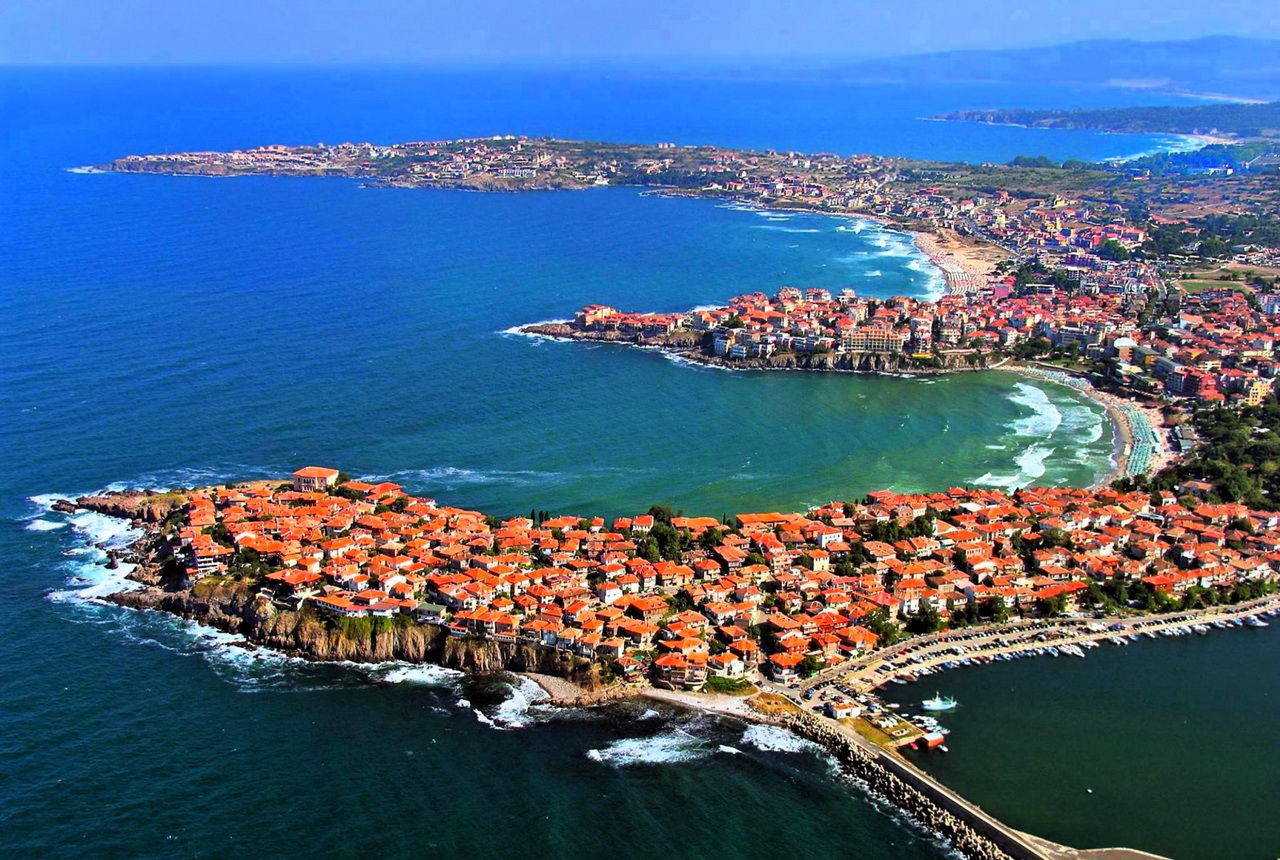 Sozopol is situated 34 km south of the regional center Burgas, on a small peninsula that is the South end of the Burgas Bay. It is the oldest town along the Bulgarian Black Sea coast, established around 610 B.C. as a Greek colony. Sozopol was called Apolonia at the time, and flourished as a trade intermediate between the Greek world and the wealthy Thracian tribes.

You can view a short video of Sozopol on video.

Apolonia was well-known in ancient times for the Temple of Apolon the Curer, whose 13 metre tall statue was the work of Athena’s sculptor Kalamis. Around 72 BC Apolonia was completely destroyed by Mark Lukul and his Roman legions, during a punishment crusade for Apolonia’s support of Mitridat the Fourth against Rome. It was not before the 4th century A.C. that Sozopol rose again from the ashes, after major political and ethnic changes in the Roman empire and the establishment of Konstantinopol as a regional center of the Roman Empire. The new name of the town, Sozopolis, meaning “the City of Salvation”, symbolizes that revival.

Sozopol is withstood the Barbarian attacks between 400 and 700 AC. It was annexed by khan Krum in 812 to the recently established Bulgarian country and was permanently disconnected from the Byzantine Empire in the period 972-1366. Sozopolis flourished during the 13th century: it was an important port, a trade intermediate, a religious center. The monastery St. Johan Predtecha on the nearby St. Ivan Island was a religious and cultural center with international importance.

After the fall of Bulgaria under the Ottoman Empire in 1453, Sozopol gradually declines to a poor fisherman village. Its next revival would not come until the Liberation from Turkish rule in 1878, when its favorable location and lively population brought it to new prosperity.

Today Sozopol is an attraction for both young and old, married and single. It has everything for everyone:

Sozopol is a bustling tourist center in the summer, offering 2 wide golden sand beaches within walking distance (Central and Harmani beaches). Two other large, golden sand beaches, the Golden Fish and the Kavatsi camping areas are located north and south of Sozopol, respectively, a 10 minute ride from Sozopol with an open attraction bus. The Old Town provides a unique atmosphere of cobble stone streets lined with coffee shops, restaurants, jewelry stores, and wood-and-stone houses dating back to the 19th century. The parks and the alleys have been completely renovated, the old fortress wall has been restored, and a fountain was built in the shady central garden where you can cool off from the summer heat. Many traveling musicians perform along the alleys in the evenings. Retro photo shops and pottery classes also line your leisurely evening walk. Because of the steep rock shores of the peninsulas forming the Bay of Sozopol, many restaurants are situated directly above the water and offer a wonderful view of the bay or the yacht and fisherman dock on the opposite side.

The Old Town of Sozopol has preserved many historic attractions. The Church “St. Bogoroditza” dates back to the 17th Century and is built halfway under the ground, due to the Ottoman occupiers not allowing Christian churches to be built higher than 1 metre above the ground. Many other ancient items, such as pots, amphoras, weapons, burial items, models of ships, etc. are presented in the newly built Archeological museum in the center of the town, to the side of the large outdoor stage.

About 20 km south of Sozopol are two of the best-preserved natural areas in Bulgaria. There is a 62-hectare swamp reservation, called Arkutino, which is covered with floating white lilies, irises, and floating lianas. I wooden bridge takes you in the middle of the swamp where you can enjoy the view. Just 5 km south of it is the Ropotamo river reservation. A 45 minute boat ride along the river, to the estuary and back, will take you through untouched nature, rocky hills, and river plants, while being accompanied by fish jumping outside the water.

In the summer there is frequent transportation to Burgas and the surrounding smaller towns via mini-buses.

Check out some pictures of the excavations and pottery items in Sozopol at the National Geographic’s web site.